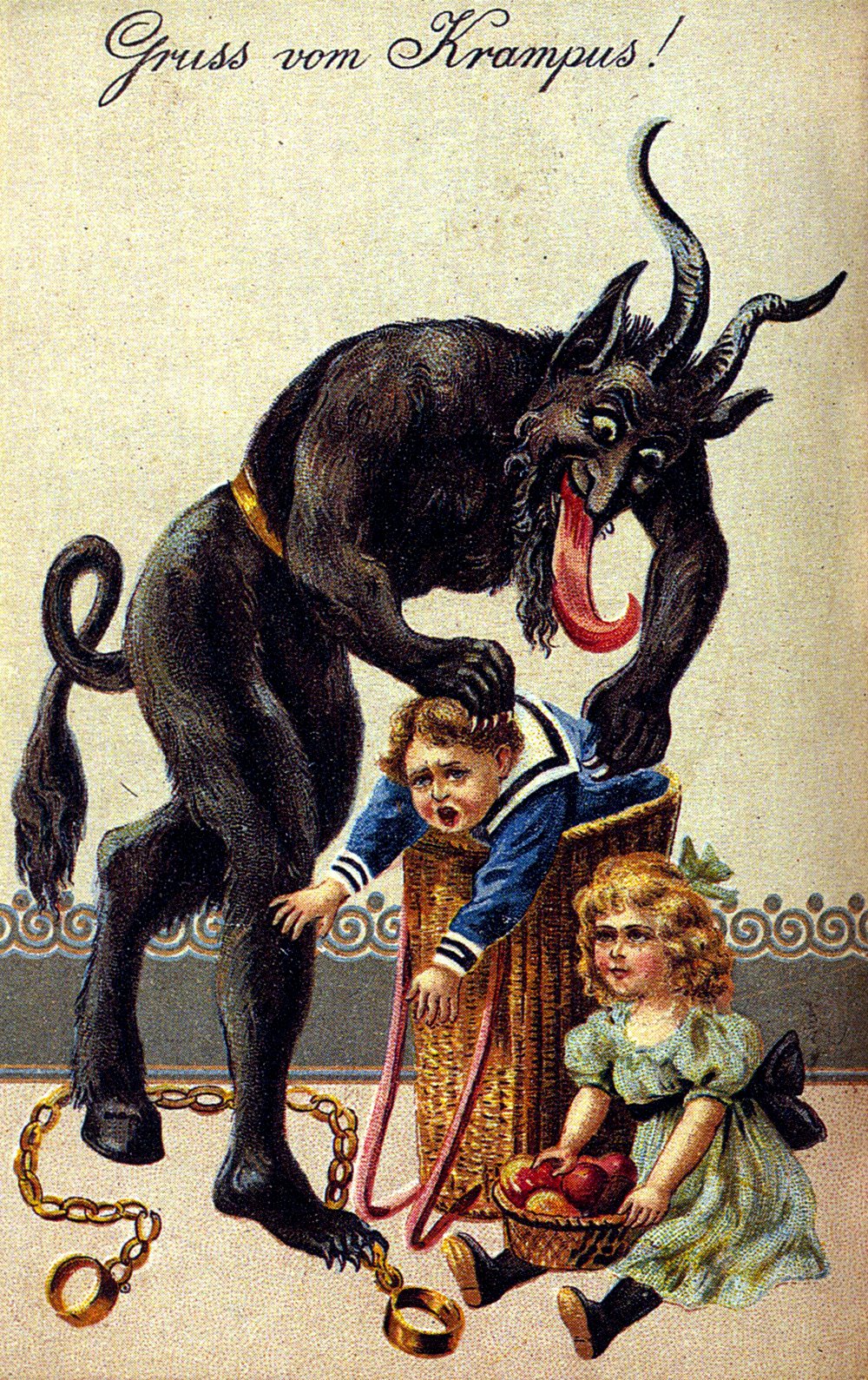 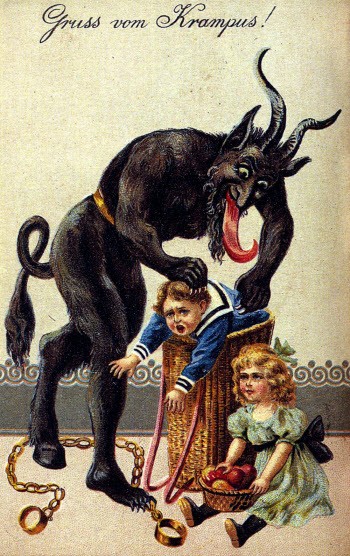 Are your children misbehaving? Do you think they may be on Santa’s “Naughty List?”

If so, tell them to change their ways because on the night before Christmas Eve Krampus may stuff them in a basket, carry them to his lair and eat them for his Christmas dinner!

The Legend of Krampus dates back to pre-Christian Germanic traditions. According to the official website, Krampus.com:

Krampus is the dark companion of St. Nicholas, the traditional European winter gift-bringer who rewards good children each year on December 6. The kindly old Saint leaves the task of punishing bad children to a hell-bound counterpart known by many names across the continent — Knecht Ruprecht, Certa, Perchten, Black Peter, Schmutzli, Pelznickel, Klaubauf, and Krampus. Usually seen as a classic devil with horns, cloven hooves and monstrous tongue, but can also be spotted as a sinister gentleman dressed in black or a hairy man-beast. Krampus punishes the naughty children, swatting them with switches and rusty chains before dragging them in baskets to a fiery place below.

Celebrating Krampus didn’t become tradition until the 17th century after the Catholic Church and Inquisition efforts failed to discourage celebrations around “goat-like beasts.” Krampus is a mere curiosity in America, but is a staple of the season in European countries such as Germany, Austria and Italy.

December 6th is known in some European countries as The Feast of St. Nicholas. The word Krampus means “claw”, certain Alpine villiages have big parties featuring the demon-like creature who hangs around with Santa Claus. The men parade around dressed up as Krampus while the women wear masks representing Frau Perchta, a nordic fertility goddess. In these celebrations Saint Nicholas concerns himself only with the good children giving them gifts, while Krampus is responsible for the bad handing out coal and ruten bundles (bundles of birch branches that Krampus carries and occasionally swats children with).

Throughout the Advent Season there are organized runs called Krampuslaufen. In these events, participants dress up as Krampus, proceed to get liquered up (preferebly on Krampus Schnapps) and go for a run.

Since the 1800s, Europeans have been exchanging humorous cards featuring Krampus. Most of the time they say “Grüss von Krampus!” which means “Greetings from Krampus!” These cards feature humorous poems or sayings as well.

So, if your kids are acting up and you need extra motivation this Holiday season. Introduce them to Krampus and let me know how it turns out!